So, two days no posts... Lemme explain it.

On Tuesday, something happened in Jozi that DOES NOT HAPPEN. At least, it happens only once in like every ten years and then only for fifteen minutes. It is only the second time in my lifetime that it snowed in Johnannesburg. Really. 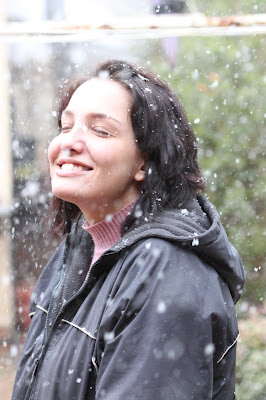 This picture shows me, without a drop of makeup on my face, in the snow when it just started to come down.

It was quite magical! It does snow every now and then in other parts of South Africa, for those of you who are from snowier countries. Just not in my neck of the woods. So you can imagine the excitement! My momsie says the kids at her school were properly crazy, awed at the little white flakes.

And, since hubby was working from home, he grabbed the camera and went a'snow snappin' and hence you see me smiling in the snow.

It did not fall for too long, we had more sleet than anything else, but for a short time, my home was transformed into a Winter wonderland. 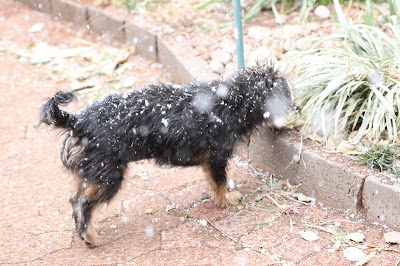 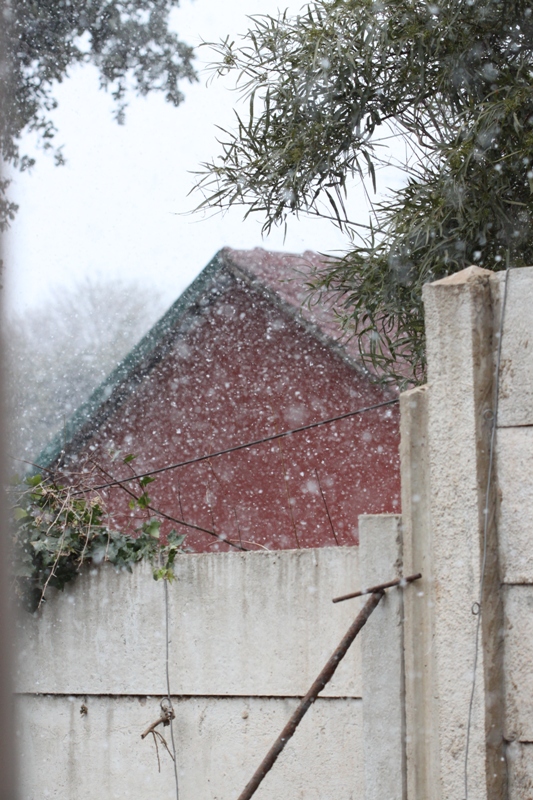 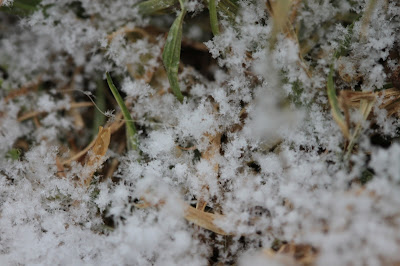 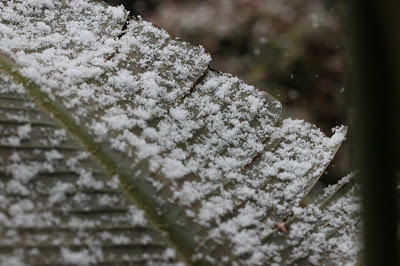 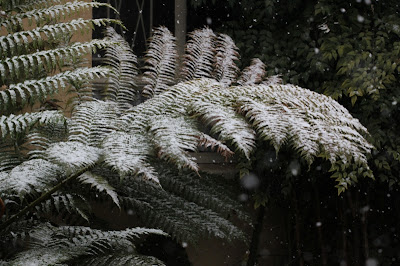 While it was snowing, something else happened. This second occurrence happens frequently in South Africa on the whole and quite often in Jozi. What do I mean? The power went out.

Living in a third world country, one would think we're better equipped for power outages. We're not. Really. The power went out just as the snow was falling, at around half past four. Then the snow stopped falling and the clouds blew away. Hours passed us by, but the power remained out. It started getting colder and darker and still no power.

We went in search of something to eat, finding the power off in a massive radius around our house and not a single fast food place had generators, or their generators had failed by the time, We drove around for an hour, looking for something to eat, but to no avail.

So we went home.

Luckily, my in-laws have gas. The stove variety (get your mind out of the gutter!!). And they could heat something for us to munch on, as well as feed me coffee, since they could boil water.

The power came on for about forty minutes around nine that night, but went out again just as swiftly as it had come. It was still off when I woke up. One the coldest day of the friggen year, we had not power!!

No coffee first thing in the morning? It just equals disaster. But again, I went to the in-laws and had my coffee there. Now, I couldn't even get in my car and find a nice coffee shop, since there was no power anywhere. It sucked.

Anyway, my phone's battery died and my laptop only had enough juice left for an hour. So I read LOTR, drew a picture and hung around in my house.

At last, at about quarter past 12, the power came back on. But then, I had no internet, since the modem thingy reset itself and Jan had to fix it when he got home.

So now you know. I couldn't blog on Wednesday, since I was plunged back into the dark ages. Yesterday was a public holiday, Woman's day, and we slept in and had the day off. I honestly forgot to blog, since it felt like Saturday. So shoot me. :) You would have had this little rant post yesterday, so in the end, you got what I wanted to say anyway!

All that has happened just made me thankful again for how blessed we are. I mean, just five minutes from where I live, you can find informal settlements by the dozen. I was inside a brick house, we had the facilities to at least heat our food and have something warm to drink. When I went to sleep, it was in a real bed, with a mattress and blankets and I was warm.

So many people had to spend the coldest day of the year in shacks, made of any leftover materials they could find. Some had to sleep on the floor.

I am thankful for what I have and if you can read this post, you should be too. No matter how difficult things get in your life, chances are, there's someone who's worse off. If you believe, like I do, that it's God given, take a moment of your day to say thanks. We're blessed really.