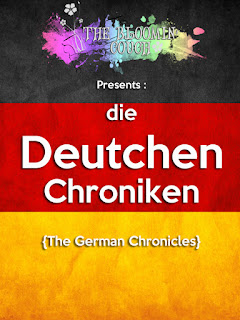 The question I get asked most at the moment is "How different is living in Germany from living in South Africa?"

The answer is, it's different. But seeing as so many people don't like the vagueness of that statement, I thought I'd quickly highlight the basics. Or at least the things that stand out to me.

This includes the language (see #2), the weather, the building style, culture. The weather, for example, is like a toddler here, fluctuating between an array of possible moods (if I can call weather moody). It can be sunny one moment and rain the next, just before the wind rolls in and blows away all of the clouds in minutes. In half an hour, it might rain again.

In Johannesburg, you're more or less able to discern what the weather will do for the rest of the day. Sure, there are days when it's all weird, but on the whole, it's more stable. If the rain stops and the sun comes out, it's probably going to stay that way.

In our particular province (North Rhine Westphalia), the buildings aren't as old as in other parts of Germany, because this area was bombed so often in the Second World War. This means that a lot of the older buildings are no more, but it still screams 'Europe' to me, because they continued to build in a typically European manner. It's very beautifully maintained here, there are at least two large trees at every crossing and flower baskets under the windows.

South Africa, on the other hand, doesn't really have a specific building style. It's more eclectic. Have you met the people there? They're incredibly diverse and so is their building style.

Another thing of note about the buildings is how dense they are. The particular area we're living in at the moment is one of the most densely populated areas in Europe. This means that there are a lot of people per square meter, which brings with it apartment block upon apartment block. There are more freestanding houses in South Africa, with yards and pools and SPACE. If you consider Germany is much smaller than SA, but has about double the amount of people, this makes sense.

Culture is different here too. As I said, South Africa is diverse, so the culture is diverse too. I find the people in SA overall more easygoing and relaxed. They're one of the friendliest nations in the world, and are, as a norm, quite helpful. I'm not saying that's different in Germany, because, so far, people have been very friendly towards us. Random people have greeted us in the street and have commented on Kayla being cute. The Germans are not at all as strict as we'd been told they would be, but they are quieter than South Africans, though still polite.

I can totally understand why there isn't endless chatter on the trains or other places though. As I said above somewhere, small space, lots of people. You'd want your privacy too if you were surrounded by strangers constantly.

South Africa has eleven official languages, but in spite of that, basically everyone can speak at least rudimentary English. Almost everyone knows the slang used by all South Africans. For example, everything good can be described by the word 'Lekker' (Lack-quer), wich literally translates to delicious. The weather can be lekker, the food can be lekker, last night's party was probably lekker, and many more things are lekker. If a South African says lekker, everyone from all 11 languages knows what this means. There are many other words and phrases that are universal in this way. (I might do a post on this.)

German is the only official language in Germany (you would never have guessed, huh?), but apparently, not all Germans speak the same German. As in, the different provinces have their own dialects and these are so different that someone from one province won't understand someone from another. I kid you not. Also, some German is considered impolite, so you can offend someone if you use it. The people from North Rhine Westphalia speak a more relaxed German (as I understand), but it might be too impolite to use when speaking to someone from Northern or Southern Germany, for example.

On top of this, not everyone speaks English here. Sure, they take it as a subject in school, but if you don't use a language often, you forget it. Fact. Apparently many Germans can speak another European language as well, but, since I don't speak European languages, it still doesn't help. I know some basic words in French, because of the research I did for The Physician's Apprentice. Yes, I just shamelessly advertised. I'll do more detailed posts on the new series soon, so watch this space.

Anyway, back to life in Germany.

Not speaking German has been a barrier, sure. But not as much as I feared it would be. And I'll get this new language down sooner or later. :)

You don't just take a trolley here and shop. You need a Euro deposit to get the trolley. Not so in South Africa, where there are trolleys everywhere.

Another thing you don't find here are packers for your bought items. You pack your own stuff into your own bags, and you'll do it quickly. They get very annoyed here if they have to wait for you. So you literally pack your bought items back into your trolley and get out of the way. Then you pack the things into your bags elsewhere.

Makeup and beauty products are DIRT CHEAP HERE! I'm hyperventilating just thinking about it. And, because of the EU's ban on animal testing, stuff here is cruelty free.

I've been surprised at the local brands' quality. This applies to food and everything else we've tried so far, and it's amazing. In SA, we stuck to the brands we knew and trusted, because of the quality. Here, even the least expensive items and food are high quality.

Sundays = no shops opened. There are a few exceptions to the rule, but overall, all of the shops are closed. This applies to even the big malls. At the train stations, there are some shops open, but not everywhere. This is strange to us, because where we lived in SA, the shops were always open. Even on public holidays, you could always shop somewhere.

We literally had to explain to Jan's new boss what burglar bars are. Germans don't understand the concept. (You have no idea what I mean? Google, friend, google.)

I see squirrels every day from my window. There are majestic trees everywhere. Cars stop for you at pedestrian crossings. People drive MUCH BETTER HERE, though on the other side of the road. Church bells start ringing here almost every day, but are the most melodious on Sunday mornings. There are churches and cathedrals everywhere.

It might be cold outside, but the houses and apartments are warm. Public transport. The trams tilt to let strollers in more easily. There's a lot of graffiti around where we live. The people dress much differently from SA, and undercuts or half-shaved heads are in here. Hair. People have a rainbows in their hair (because funky colours are in).

And that's just naming the things that come to mind quickly. I could list a million other things here, but that would make this post SUPER LONG. Send me your questions and I'll do an answer post. :)


Overall, I love it. It's been an amazing journey so far and I'll keep sharing it with you.